The Record Off The Record is my own record of and commentary on public meetings in School District 61 (Esquimalt, Oak Bay, Victoria, View Royal and a portion of Saanich and Highlands ). “Official” approved minutes of Board  and Standing Committee  (OPPS and Ed Policy)  are posted on the SD61 website under the “Board of Education” menu,  generally one month after the meeting. The meeting schedule is posted on the District Calendar. Trustees are referred to by last name only for brevity; “the Board of Education of SD No. 61 (Greater Victoria) is referred to as “the Board [etc]”. No audio recordings are made of Standing Committee meetings, only of Board meetings. (No record of how the audio recording decision was made, or any debate on proposed uses of and storage of the record appears to exist.) Audio recordings begin after student presentations have finished as some trustees believed there was some perceived “danger” to or privacy issue for students who voluntarily, with parent permission, appear at a public meeting and announce their names and school. (Often, photos of the students along with their first names and school appear on the District website under “Board Highlights”.)

SD61 sets up a budget planning series of meetings and presentations over the year’s “budget cycle”.

Partner Group Budget Priorities: Responses to October 10, 2012 Input Request responses are recorded in a document that has not been organized by category; some answers / responses appear / are duplicated in more than one question category. This makes the document time-consuming to analyze.

The February 6th Public Engagement Budget Meeting, 7 pm at SJ Willis auditorium was cancelled after 20 minutes, as no members of the public attended.

The March 27 Budget Presentation was a presentation only. The Powerpoint is posted on the District website.

Wednesday April 10, 2013 was the next opportunity to ask questions about the budget. Trustees were seated at a table at the front of the SJ Wills Auditorium at 7 pm. Senior administration staff were present, as well. No members of the public attended; the meeting was cancelled after half an hour.

Last year, the Board submitted the required budget for 2012-13 in April of 2012, .  and attached a “Needs Budget’ letter that took into account input received from the consultative process with partner groups  and the public. The additional amount calculated by the Budget Committee as needed was $48,463,915. Needless to say, none of this amount was provided by the Ministry of Education.

In July 2012, the SD79 Cowichan Valley Board was fired by then-Education Minister George Abbot for refusing to submit the required “balanced” budget, and instead filing a budget with a $3.7 million shortfall that reflected the needs of the District as assessed by the majority of trustees.  ‘Former chair Eden Haythornthwaite said they were simply trying to protect students. “Our position was that in the last three years alone, in the last three budgets alone, we’ve cut almost $11 million from our operating budget and we felt we had ceased to be able to provide equal access to quality learning opportunities for all the children in Cowichan,” she said.The education minister has also appointed Surrey School District superintendent Mike McKay as the official trustee for the district.Abbott said it was regrettable the school board had chosen to put political advocacy ahead of their obligation to submit a balanced budget.’

In April 2012, a motion to submit only a needs budget from SD61 failed at the April 16, 2012 Board meeting: McNally: That the Board of Education of School District 61 (Greater Victoria) submit only a needs budget reflecting remedies for the ongoing structural deficit, and reflecting the costs for restoration of all service levels to the levels of service that existed in 2001. / Defeated: For: McNally, Alpha, Nohr, Loring-Kuhanga     Against: Ferris, Leonard, Horsman, McEvoy, Orcherton

In March, 2013, a motion to submit only a needs / restoration budget from SD61 failed at the March 25, 2013 Board meeting: McNally: That The Board of Education School District 61 Greater Victoria submit only a needs budget reflecting remedies for the ongoing structural deficit, and reflecting current costs for restoration of all service levels to the general levels of service in all departments that existed in 2001. / Defeated. Against: Ferris, Horsman, Leonard, Loring-Kuhanga, McEvoy, Orcherton  For: McNally, Nohr  Absent: Alpha

SD61 Special Board Budget Meeting, April 17/13: The Record Off The Record: When is a “Surplus” Not a Surplus?

Chair: Trustee Orcherton
A. Commencement of Meeting: Recognition of Songhees and Esquimalt  Nations’ traditional territories.
A.1 Approval of Agenda: Approved
B. Public Presentations on the 2013-2014 Budget (5 minutes per presentation) : None

The School Act Part 6, Sections 65 – 87 states many responsibilities of, and  “musts” and “mays” for Boards of Education, but the budget reference is not in those sections.  Perhaps the reference to “statutory duties” is to the Oath of Office, referred to in Section 50. More likely, the reference is to Section 111 of the School Act,  Preparation of annual budget:

Given the ongoing funding cuts in real terms over more than a decade in British Columbia, Section (3) might appear to some to be a cynical positioning of trustees between the anecdotal rock and hard place.

i) That the Board [etc] approves/ Carried: unanimous

ii) That the Board [etc] agrees [sic] to give all three readings of the 2013/2014 Annual Budget Bylaw at the meeting of April 17, 2013. (Motion to be carried unanimously) [unanimous agreement is needed to read a Bylaw three time at a meeting in order to proceed with the vote on the actual Bylaw; on occasion the unanimity did not occur and votes have gone to an email poll vote.] / Carried: unanimous

iii) That the Board [etc] 2013/2014 Annual Budget Bylaw in the amount of $195,672,515 be: [read three times] And that the Chair and the Secretary-Treasurer be authorized to sign, seal and execute this Bylaw on behalf of the Board. / Carried:   For: Ferris, Horsman, Leonard, McEvoy, McNally   Against: Alpha, Loring-Kuhanga, Nohr. [ A motion from McNally to submit only a needs budget failed at the March 25 Board meeting; with only McNally and Nohr in favour. Alpha was absent.] 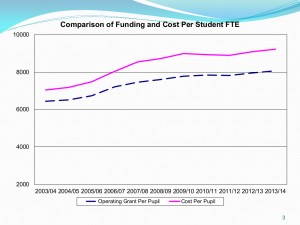 Membership in the BC School Trustees’ Association  generates expenses for Boards (using information from Janet Steffenhagen’s blog in the Vancouver Sun, March 12, 2013):

SD61 Board Meeting, April 15/13: The Record Off The Record: Audio Record of Students at Public Meeting No; Names, Photos and Schools Yes