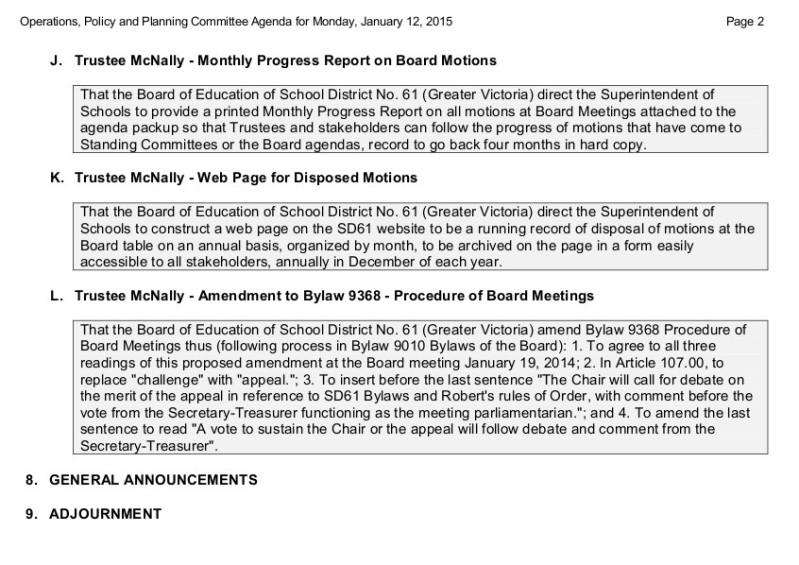 1. Approval of Agenda: Adopted, with addition of notices of motion for Board meeting from Nohr (FSAs) , Paynter.
2. Approval of the Minutes:
a) OPPS November 10 /14: Approved (not posted to District website yet.)  Lined Paper report here.
3. Business Arising From Minutes: None

“I’m here to address a number of issues that encompass fair and democratic processes and accountability when it comes to the health and safety of our children. When I wrote to the District this past week to request placement on the agenda, as a courtesy, I also informed that I would be recording the meeting. In response I was told that these meetings are not recorded. However, the School Act preamble begins with reference to democracy – a process our schools are meant to foster. This is a public meeting: Trustees are public officials who are meant to safeguard the public from reasonably foreseeable health hazards. For this reason, I will be filming the meeting as I and others have in the past so as to clarify any decisions made here tonight for those interested who cannot attend this meeting tonight. The intent of my presentation is to seek answers to a number of questions. I will read through them all and then provide you each with a copy so we can go through one at a time, as well as to assist with minute taking.

“The administration at my son’s school announced at the PAC meeting that Wi-Fi would be installed before a genuine consultation process provided an opportunity for informed consent. Instead, an uninformed yes/no vote occurred with no school-wide discussion. My observation is that at every level, this discussion has been minimized, controlled, dismissed and it is therefore in direct conflict with the often talked about educational pursuit to encourage critical thinking in our students. Below is an outline of the consultation process undertaken by Principal Cammy Coughlin and the Frank Hobbs Elementary School PAC:

[5. Sometimes but not this time: Superintendent’s Report]
5. Finance and Legal Affairs:

John Malcomson on “holdback funds” in the Tyee, March 13, 2007: According to a report currently circulating amongst district secretary-treasurers, the Ministry of Education has quietly decided to revise the rules governing funding allocations to districts. The specific object of this change is the funding allocation holdback.

The holdback is a portion of the ministry’s annual funding allocation to districts that is reserved from distribution when the funds start to flow. This is because the initial allocation figures are estimates, based on projected student enrolments. These estimates are readied in the spring that precedes the start of the coming school fiscal year on July 1. When actual student counts and other data elements are known, the funding holdback is released to allow for necessary district-level funding adjustments based on accurate figures.

That is the way it has worked historically. Until this year. Now the rules have silently been changed.

6. Public Disclosure of In Camera Items: None.

7. New Business /Notice of Motion: [New Business and Notices of Motion will be separated on future agendas as they are not the same thing.]

/ Withdrawn. Worthwhile concept but poorly constructed; will bring back. [Establishing a trustee-led budget committee is critical and needs to be thought through more fully.]

B. Nohr: That the Board request senior administration to provide a report at first OPPS after spring break outlining current and long term IT directions, priorities, and departmental goals, along with costs to the District for the past 3 years, and projected for 2015. / Carried as amended (below) Unanimous.

C. Nohr: That the Board request senior management to provide an update on the initiatives of the health and safety advisor to date including and explanation of Homewood Health and the costs involved. / Carried. For: Loring-Kuhanga, McNally, Nohr, Paynter, Watters     Against: Ferris, Leonard, Orcherton, Whiteaker

D. Nohr: That the Board request the Superintendent and Secretary Treasurer to provide three possible funding for the teachers’ $400,000 salary / benefits to pay for the eighth day of work in September upon teachers’ return to the classroom after the trike settlement./ Carried.  For: Loring-Kuhanga, McNally, Nohr, Paynter, Watters  Against: Ferris, Leonard, Orcherton, Whiteaker

E. Orcherton: That the Board set aside an hour on the OPPS agenda(s) to engage in ongoing discussions with Trustees, stakeholder groups and the public on defining what “fully funded” public education is. / Withdrawn, as Leonard has made time for discussion at OPPS meetings.

F. Watters: That the Board send a motion to BCSTA to be considered for addition to their upcoming Provincial Council agenda requesting that the BCSTA resolve to invite a local First Nations representative to conduct a traditional welcome at all provincial BCSTA conferences and academies./ Carried. Unanimous.

G. Watters: That the Board request that the Secretary-Treasurer prepare a report to be included as an information item for discussion at the February 10/15 OPS meeting on the financial costs and benefits of BCSTA membership over the last 3 years including all association fees and conferences and the value of any services received. / Carried. For: Loring-Kuhanga, McNally, Nohr, Paynter, Watters   Against: Ferris, Leonard, Orcherton   Abstained: Whiteaker

H. Watters: That the Board direct the Chair to write a letter to the Minister of Education calling upon him to reverse his December 4/14 decision to stop funding graduated adult upgrading courses offered through the province’s K-12 public school system / Carried. Unanimous.

Information provided by the Secretary-Treasurer’s Department: The following courses will no longer be Ministry-funded for graduated adults after May 1, 2015. These courses may be offered by School Districts on a fee for service basis: 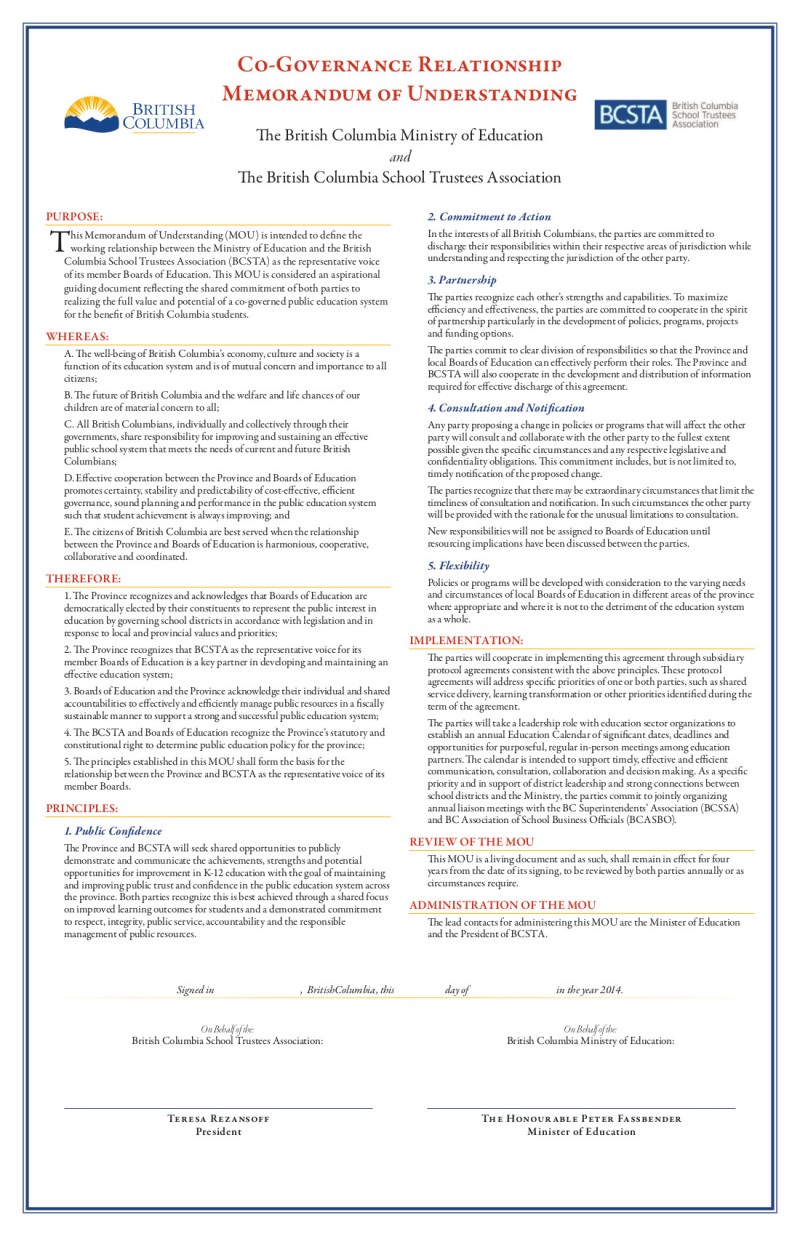 I. McNally: That the Board direct the Superintendent to conduct research examples, costs and processes for establishing a Strategic Plan, and report back to the Board with preliminary information at the earliest OPPS meeting possible./ Carried. Unanimous.

J. McNally: That the Board direct the Superintendent to provide a printed monthly progress report on all motions at Board meetings attached to the agenda packup so that Trustees and stakeholders a can follow the progress of motions that have come to a Standing committee or the Board agendas, record to go back 4 monthsin hard copy./ Carried. Unanimous. [Senior administration already keeps these records.]
K. McNally: That the Board direct the Superintendent to construct a web page on the SD61 website to be a running record of disposal of motions at the Board table on an annual basis, organized by month, to be archived on the page in a form easily accessible to all stakeholders, in December of each year./ Carried. Unanimous.

L. McNally: That the Board amend Bylaw 9368 Procedure of Board meetings thus: 1. To agree to all 3 readings of this proposed amendment at the Board meeting of January 19, 2014; 2. In Article 107.00 to replace “challenge” with “appeal”; 3. To insert before the last sentence “ The Chair will call for debate on the merit of the appeal in reference to SD61 Bylaws and Robert’s Rules of Order with comment before the vote from the Secretary-Treasurer functioning as the meeting’s Parliamentarian, and 4. To amend the last sentence to read “A vote to sustain the Chair or the appeal with will follow debate and comment from the Secretary-Treasurer”. / Referred to February OPPS. Unanimous.

Jan 19/15: Board Meeting: The Record Off The Record:Concussion Policy, FSA Opt Out, More