The Record Off The Record is  my personal record of and  commentary on SD61 Board and  Standing Committee meetings. Official, approved  minutes are on the SD61 website, one  month after the meeting.

SD61 Greater Victoria School District includes  students in Esquimalt, Oak Bay, Victoria, View Royal, parts of Saanich and the Highlands, and the Traditional Territories of the Songhees and Esquimalt Nations.

Trustees  are assigned by the Chair as members of one of the two standing committees, Education  Policy and Directions, and Operations Policy and Planning. Agenda setting is the prerogative of the Committee Chair, with input from senior administration.

Trustees don’t “have to”  attend Standing Committee if not assigned, and some don’t, but standing committees are the best opportunity for stakeholders, public, and partner groups to make their views known to Trustees as  Standing  Committee structure operates on less formal   Rules of Order than does the Board,  ie. no need for a seconder for a motion, and a Trustee  can speak as many times as the Chair allows. The question can’t be called in a standing committee. Most substantive debate on motions takes place at the standing committees.  Standing Committees also provide for dialogue between  presenters and the Board.

For OPPs and Ed Policy,  “quorum is a majority of trustee members on the committee”.  However, the relevant Bylaw also says “All members of the Operations Policy and Planning Committee shall be ex officio members of the Education Policy Development Committee with voting rights”. So assigned Trustees are the ones who count for quorum = 3.

Policy Review Subcommittee:  (advises both Standing Committees)
March-June Leonard/Watters (term ended)    Sept-Nov  Nohr/Whiteaker
Dec-Feb 17  McNally-Paynter.   During the 2012-2015 term, Trustees who pointed out the need for Policy review were told more than once by a majority of Trustees that it would be too much work for senior administration, and that it would take place on a one-off  interim basis. That process resulted in nearly every reference to a strategic plan being deleted.

External Trustee Liaison assignments are made by  the Board Chair 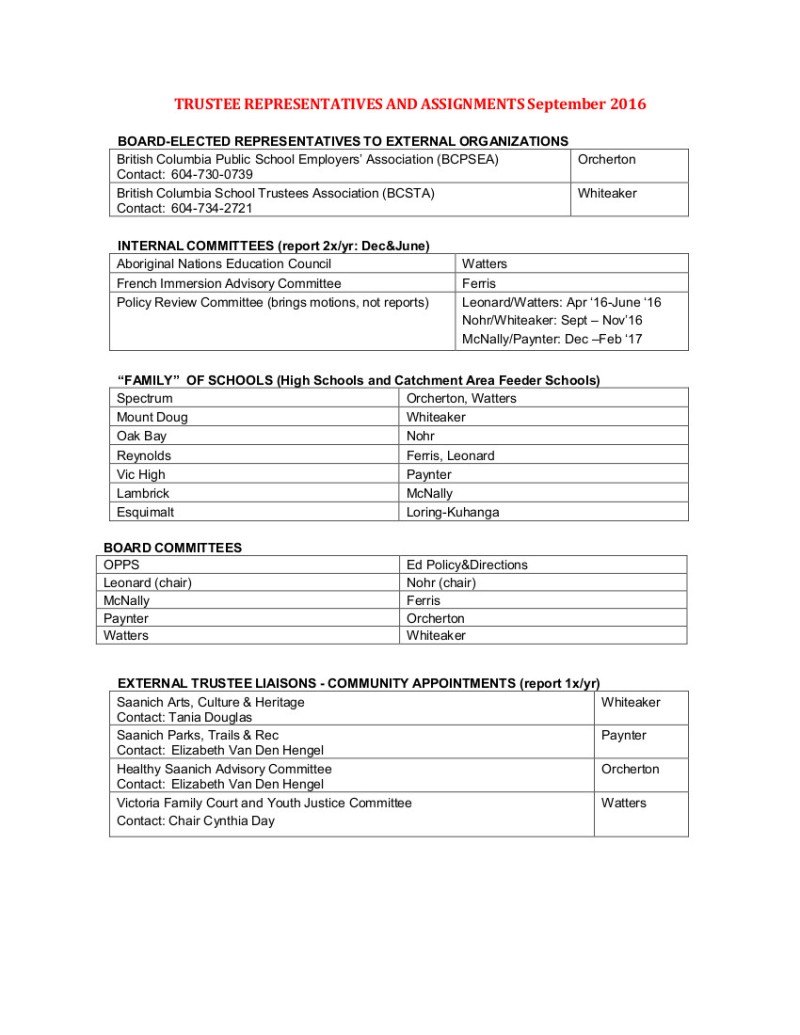 Although Paynter advised in his January report that the French Immersion committee had never met during his term of assignment and thus advised that there was no need for a Trustee rep, Administration recommended keeping a rep to the committee as it may be more active. Junior  Achievement has not needed a rep for some time so has been eliminated as a Trustee assignment.

Get The Politics Back Into Education