The Record Off The Record is  my personal record of and  commentary on SD61 Board and  Standing Committee meetings. Official, approved  minutes are on the SD61 website, one  month after the meeting.

SD61 Greater Victoria School District includes students in Esquimalt, Oak Bay, Victoria, View Royal, parts of Saanich and the Highlands, and the Traditional Territories of the Songhees and Esquimalt Nations.

Meeting schedule here.   Next meeting Jan 23/17: Board meeting.Meeting agendas posted on SD61 website Friday before the meeting. Board meetings  audio and video recorded, though Standing Committees are not. (Under the Board of Education menu.)

Trustees  are assigned by the Chair as members of one of the two standing committees, Education  Policy and Directions, and Operations Policy and Planning. Agenda setting is the prerogative of the Committee Chair, with input from senior administration.

Standing committees are the best opportunity for stakeholders, public, and partner groups to make their views known to Trustees.  Standing  Committee structure operates on less formal   Rules of Order than does the Board, ie. no need for a seconder for a motion, and a Trustee  can speak as many times as the Chair allows; members of the public and presenters can ask questions of each other and engage in dialogue.The question can’t be called in a standing committee, meaning debate can extend for some time. Most substantive debate on motions takes place at the standing committees.

Recent Change to Standing Committee vote:  October 17/16, Whiteaker: That the Board amend Bylaw 9130 Standing Committees to remove the words “with voting rights” from Item #4 and Item #5. / Carried. Unanimous.  This had the effect of allowing only members of the Standing Committee to vote on motions [and the effect of fewer Trustees attending the standing committee they are not assigned to, thus possibly  missing important information] , though other Trustees can put motions on the agenda, and if they attend,  can participate in  the debate. The Chair of the Board is  an ex officio member of both Committees, with voting rights. A quorum is a majority of trustee members on the committee.

Ad Hoc Committees of the Board and their terms of reference are listed on the SD61 website.

My motions instituting reports from Committee members (never required in the past; several committees Trustees were assigned to in the 2012 term never met or didn’t even exist)  carried in June 2015: 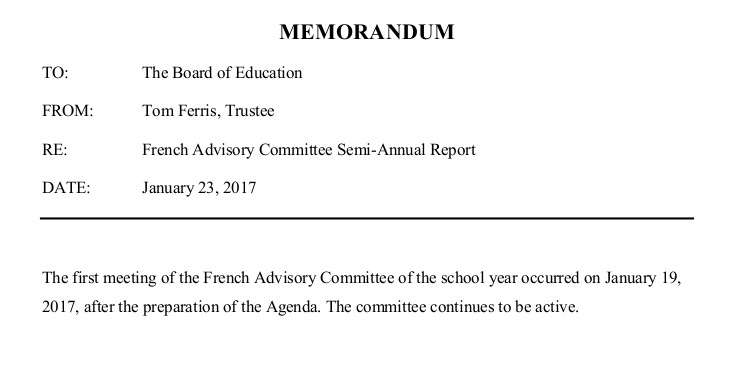 Jan 16/17: Operations Policy and Planning: The Record Off The Record: Long Term Facilities Planning is Exciting!