Voting Day Local Elections October 20, 2018. New rules and info here.  Yes, I will run again for Trustee in SD61 Greater Victoria. SD61 is in the midst of many  changes and will need progressive vision and commitment to clear, understandable and accountable process and attention to consistent provision of clear backup for statements. My voting record and my motions and rationales here: Sticky post: Motions and Trustee Voting Records  January 2012 –March 2018.

And here we [will] go again in early fall with all those vinyl signs – it’s hard to believe we’re not past simple name recognition  as an election  strategy.  In the 2014 election  I had 3 Coroplast signs  and moved them around SD61’s considerable area. CRD recycling doesn’t  list vinyl election signs, when 1000s of them are going to be disposed of – somehow – at least every 4 years.

SD61 Greater Victoria School District includes students in Esquimalt, Oak Bay, Victoria, View Royal, parts of Saanich and the Highlands, and the Traditional Territories of the Songhees and Esquimalt Nations.

October 17/16:  That the Board amend Bylaw 9130 Standing Committees to remove the words “with voting rights” from Item #4 and Item #5. / Carried. Unanimous.  This had the effect of allowing only members of the Standing Committee to vote on motions, though other Trustees, if they attend,  can participate in  the debate. The Chair of the Board  ex officio member both Committees, with voting rights. Quorum is a majority of Trustee members on the committee.

Dialogue with the Public is welcome during Standing Committee Meetings.
Only appointed members of the Committee can vote.

Next: Compelling discussion on future of French Immersion configuration in SD61.  Little (no) discussion of late immersion but even Canadian parents for French, a strong immersion advocacy group, say ” ‘Fluency’ and ‘bilingualism’ are difficult terms to define, as there is a range of fluency and bilingualism. However, students completing the Late French Immersion program should be comfortable speaking French and be able to understand native French speakers with ease. Their French accents will probably not be as authentic as that of Early French Immersion graduates. Late French Immersion graduates should be capable of working and living in a French environment and studying at a French-language university.”

Don’t get me wrong; I love the language and as  public school student took every course I could from grade 7 onward, which was the first year I could access it at the time in Alberta public schools. (“J’entre dans la salle de classe; je regarde autors de moi”. I still remember that set piece we must have repeated hundreds of times over the school year. That was language instruction then.) I followed up with every class I could take in high school. (Thank you Mrs. Simpson at Ross Sheppard Composite High School; you were brilliant. ) I did the same at University of Alberta and UVic – grabbed every French course I could cram into the timetable for  a 5 year Education degree, and was fortunate to live with a French speaking family for a couple of years. I completed the 5 year UVic FLDP in two years, and then didn’t speak French for decades. (You know what happened. I recently tried to get some vocabulary and verb tenses back with Duolingo (used in a SD61 BAA course “Travel Languages”), which was fun but only goes so far. ) The point of all this is, late immersion can work really well. You just have opportunities – early or late immersion – to keep speaking French. 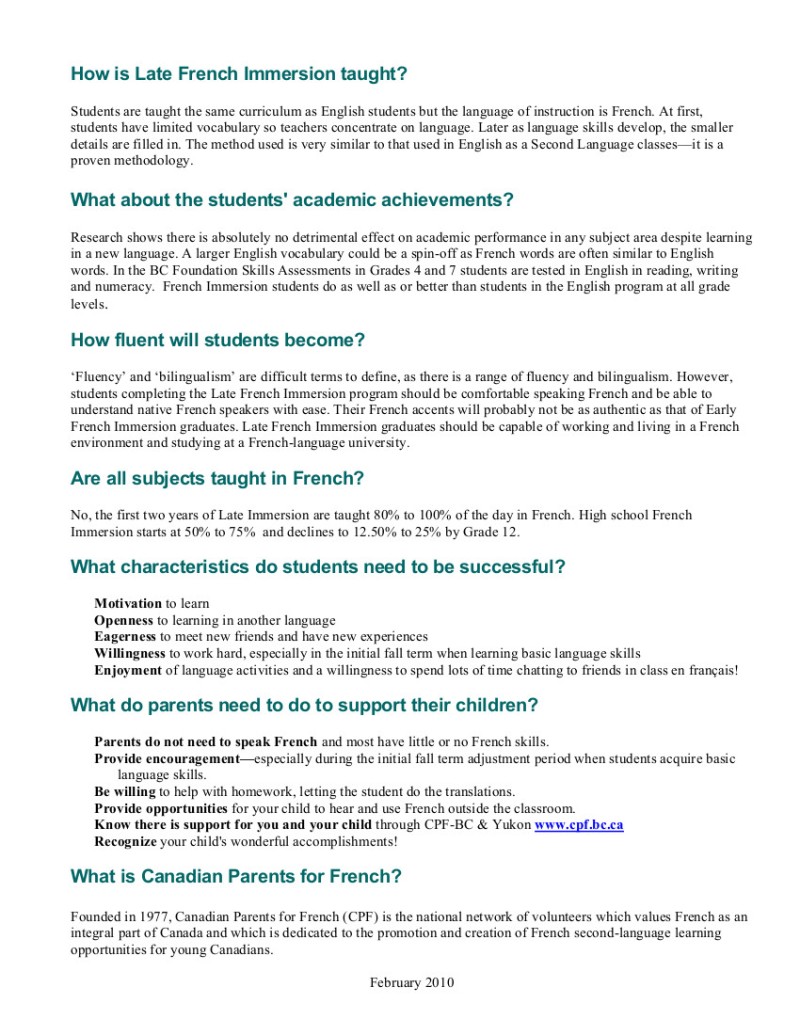 1970’s, dual track was “balanced”. SD61 had higher %age of students enrolled than most Districts in BC. 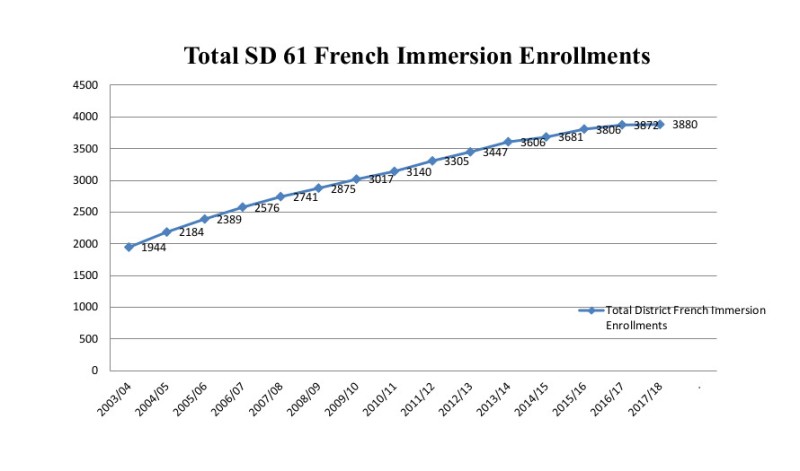 About 3880 students enrolled now. Reasons: dual track setting is a Choice program. If no spaces at entry point school, have to go to a different school or choose English track and wait until Grade 6. This has slowed down enrolment.

This is higher than most School Districts in BC. 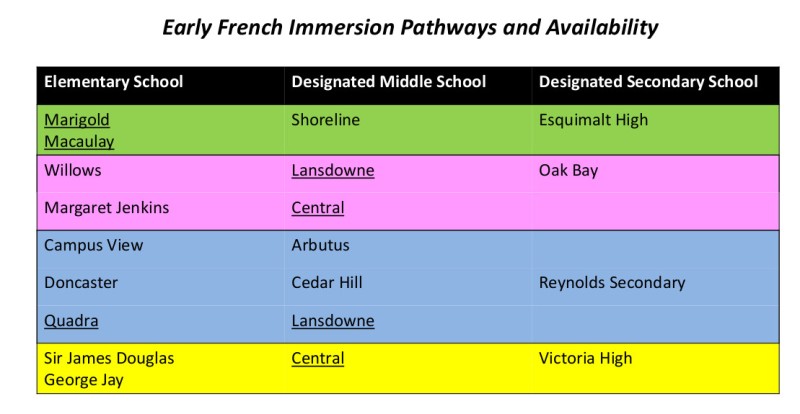 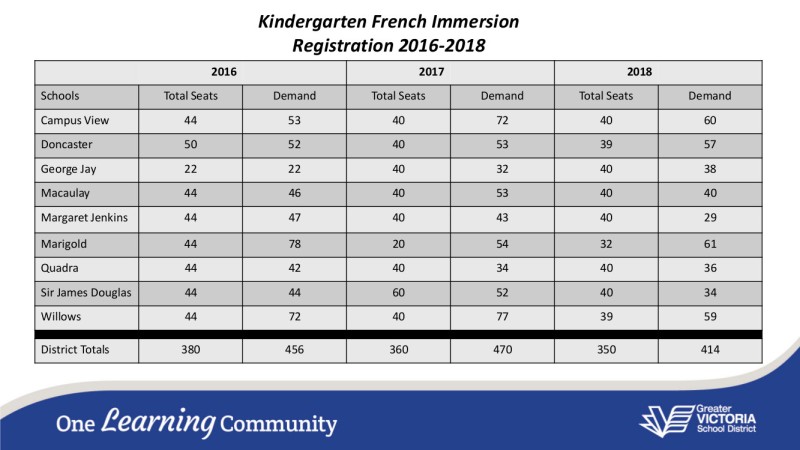 Above – consideration for adding one or more dual tracks on the West side. Probably would have to add another dual track in a few years. Or, could create 4-5 single track French Immersion only schools across SD61 with their own catchment boundaries. 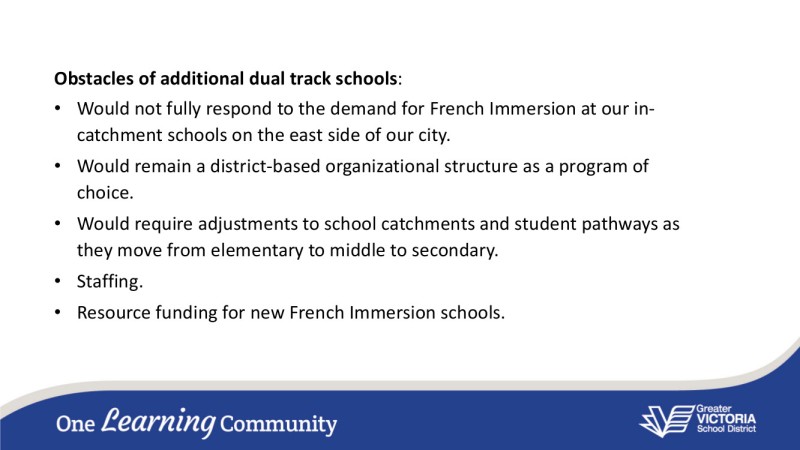 We all wish for the magic formula or test that would provide us with an objective answer to the question of potential success in the French Immersion program.  The fact remains that each and every case has to be evaluated individually.  Although this evaluation can be quite subjective, there is a systematic way to look at available information and make an informed decision on the subject. It is important to remember when making a decision that in many cases, a transfer out of the immersion program will not lead to elimination of the learning frustrations.  Furthermore, it may have negative effects on an already fragile self-image.  Our objective is to strive to serve all students in the second language.  We must, however, remember that in some cases, however few, a transfer to the English program would be beneficial and would reduce some of the debilitating frustrations felt by some learners.  The question here is who do we transfer, why and when?

C.3 McNally: Trustee Elections 2018: McNally request to move to May agenda as related BCSTA document is unavailable  at present./ Moved to May Ed Policy agenda.

C.4 BAA Courses at Vic High: Associate Superintendent Kitchen and Vic High Principal Aaron Parker:  Introduction to Electronics / Electrical 10, Introduction to Autobody 10, Junior Art Metal. These courses have been ongoing at Vic High but the provincial reorganization of curriculum puts them outside any course as they don’t fit. Hence the request for BAA status./ Carried. Unanimous [unanimous vote of assigned members of Ed Policy.]

[As of  2013, SD61 Trustees had over several years approved 155 BAA courses, scattered around the secondary schools.]

C.5 Watters: That the Board endorse the priority areas of focus identified by the Advocacy Ad Hoc Committee and task that committee with developing action plans on each item to be brought back to a future Education Policy and Directions meeting. / Carried. Unanimous. 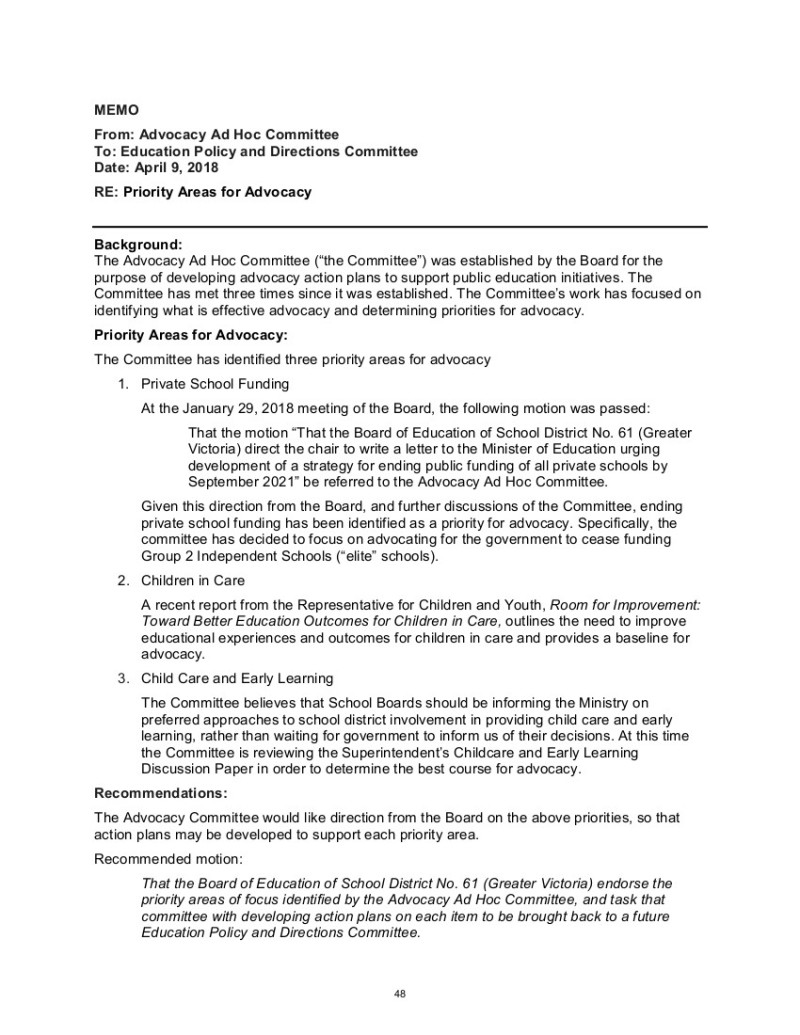 Letter going to ministry from SD61 Board: “We understand that “Group 2” independent schools are typically the “elite” private schools that fund their students in excess of the average per student cost in the public system. We feel that eliminating this funding is appropriate given the resources available to these schools while ensuring that this would not have an impact on other types of more modest private schools. While the Board ultimately believes that all students should be in the public system, this short term step should be taken while the broader issue is addressed.”

And at E.2 c: c) McNally: That the Board direct the Chair to write a letter to the Minister of Education urging development of a strategy for ending public funding of all private schools by September 2021. /    Watters: Motion to refer to Advocacy Ad Hoc Committee./ Carried. Unanimous. Abstain: Leonard